Food Named After Me

Several years ago, for some reason, the folks at Daggwood Cafe in Tucson mentioned my name on their menu. And now it's happened again (although, again, temporarily).

This is the Buzz Burger: 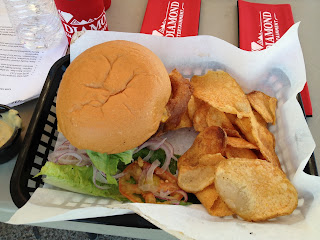 which was devised by the folks at Sam Witches And Such on the eastside for the Great Tucson Burger Tour. It's got beef stuffed with ham and cheese... plus bacon, onion rings, a slice of pineapple and teriyaki sauce, and it was awesome.

Sadly, it was only available for one week. But maybe they'll bring it back again for next year's Great Tucson Burger Tour.
Posted by Buzz Jackson at 4:09 PM