"Coming To America" was on Comedy Central twice this weekend...

...and it reminded me that I have a personal connection, indirectly, to the movie. I worked in the mid-80s for Wendy's, in Glen Cove (on Long Island) New York. After I had been there for some time, the franchise owner had me occasionally go to new stores to help train the employees. 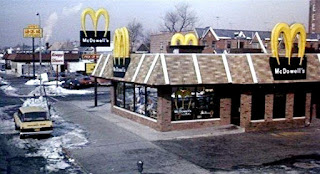 is McDowell's, where Eddie Murphy's character works after moving from Zamunda. McDowell's was a thinly-disguised McDonald's in the movie - but in reality, it was a soon-to-be-opened Wendy's Old Fashioned Hamburgers. If I understand correctly, the movie producers needed a restaurant to be the fictional McDowell's. They found a store that was going to be a Wendy's when finished - they filmed, and when filming was done, construction was completed and it opened as a Wendy's.

A few weeks later, I had the opportunity to train some of the new employees of the Wendy's.

My brush with greatness.
Posted by Buzz Jackson at 6:20 PM