If you've followed our saga over the past few years, you know that Kricket and I are not exactly experts at navigating a corn maze. Every year to-date we've raced in the Apple Annie's celebrity corn maze race, we've come in last. Dead last. In fact, one year we actually set a record for the longest time IN the corn maze. Well, this year... 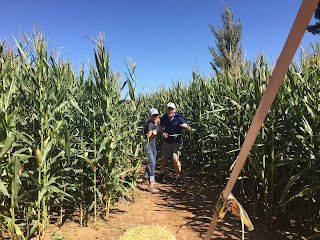 Thanks again to Apple Annie's in Willcox for the hospitality. Each of the teams that participated gets $100 for their favorite charity, and Erin's charity will get $1,000.
Posted by Buzz Jackson at 5:42 PM