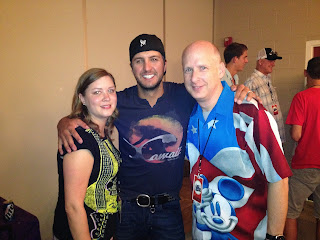 Earlier this spring I saw Luke Bryan win the "Entertainer of The Year" award at the ACMs and thought, "hmm - not sure I understand that one."

Last night I saw Luke in concert in Phoenix and thought, "now I totally get it."

In the past few years Luke has worked very hard to build a loyal fan base of all ages. In particular he has engaged college-aged music fans and brought many of them to country music for the first time. Luke's onstage personality is fun, always in motion, humorous and crowd-pleasing. He brought a little girl on stage for her birthday, he took "selfies" with people's camera phones as they passed them up from the crowd, and he kept the crowd on their feet until the very end.

I've posted some pictures of the concert here.
Posted by Buzz Jackson at 12:43 PM